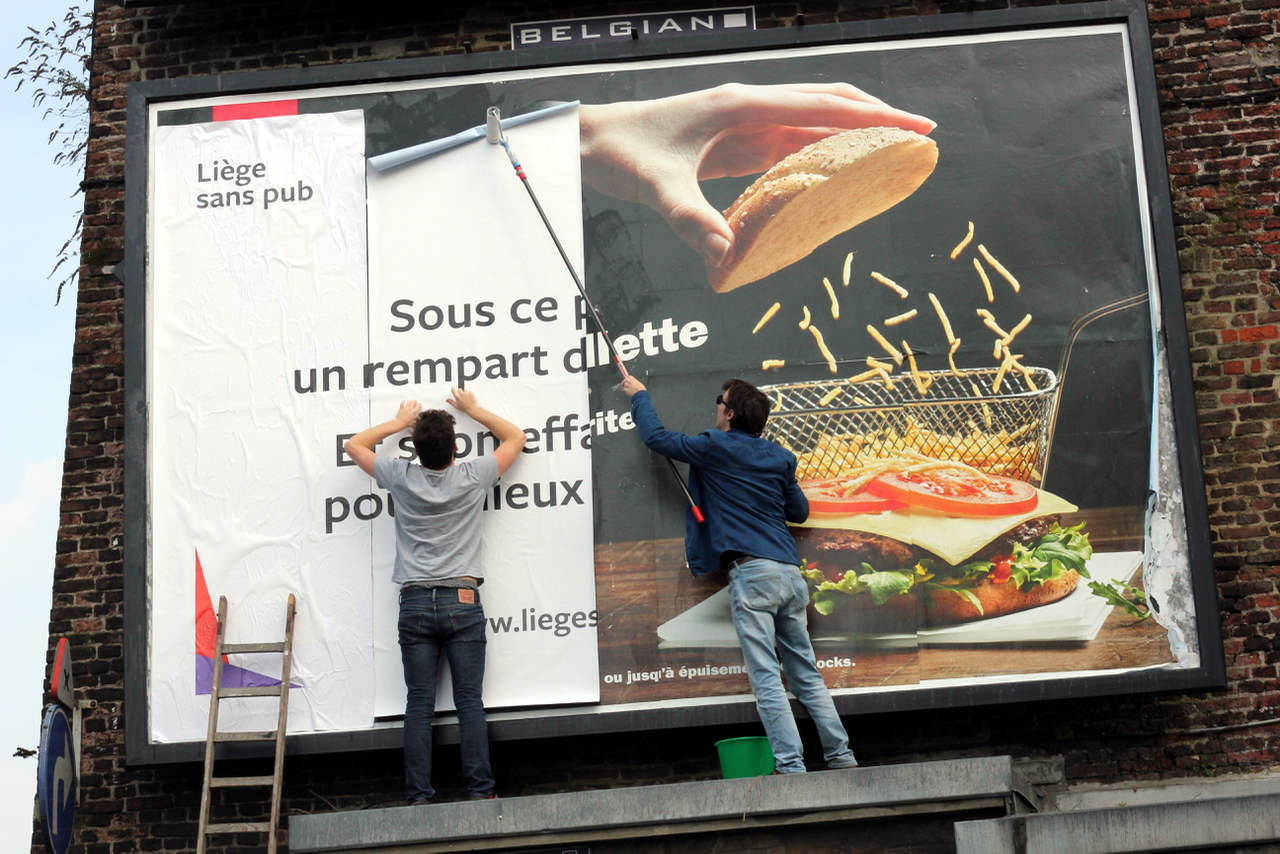 Following the launch of the network in 2017, the main aim of this years #SubvertTheCity actions were for groups across the globe to become visible to one another and to share ideas and tactics through action.

A range of different approaches were adopted for the weekend. In France, which has the strongest network of anti-advertising groups thanks to the work of  Résistance À L’Aggression Publicitaire, there were actions in 21 towns and cities. This included a 150 person protest march in Lyon calling for ‘Trees Not Ads’ and a funeral procession for digital screens in Troyes.

In Buenos Aires, Argentina El Proyecto Squatters were out with paint brushes altering adverts.  Check out the Telesur coverage below.

Other groups simply covered advertising panels with colourful fabrics or reclaimed them as spaces for public expression. In Brussels, the ‘Decotaminators’ created a ‘free expression zone’ at one advertising site and in a similar action  Adblock Bristol asked residents, “How are you today?”  with many children and families participating.

In Melbourne, Australia the ‘Tramclean Team’ removed 50 ad posters from the city’s tram network. Over the last 7 months, Victoria Police, Crimestoppers, Adshel and JCDecaux have been searching for alleged Tramclean members, ironically placing ‘WANTED’ posters in the advertising panels that have been targeted in the past.

Elsewhere London and New York coordinated their actions with shared artworks between Special Patrol Group and Art in Ad Places.

Consume Hasta Morir used playful stickers to highlight the role of consumerism in Madrid as did activists in Lausanne, Switzerland and residents held workshops in Brussels, Bristol and Nimbin (Australia) to discuss the alternatives to corporate outdoor advertising. Brandalism also took part in the appropriately named ‘High on Subversion’ festival  with a exhibition, talk and workshop at Fabrica, Italy.

Thanks to everyone who took part in Subvert The City 2018. Remember: you don’t have to wait til next year to take action. Corporate advertising spaces are available all year round!  See ideas for action here.