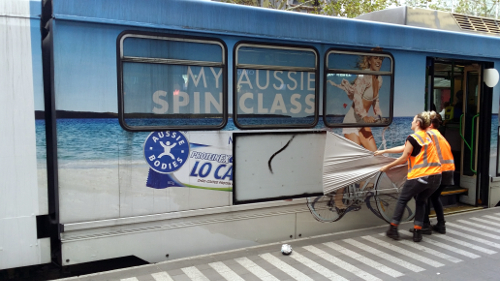 A team of 8 TramCleaners in Melbourne’s inner city removed over 50 stick-on advertising panels from trams on Sat 25th March 2017.

The activists, dressed in DIY hi-viz labelled “ADHEL TramClean” (a play on the advertising company ADSHEL, and cleaning company Transclean) directed trams where to stop and instructed drivers that the advertising had been deemed destructive and that it needed to be removed. The drivers happily waited whilst the ads were torn from the trams and helped by closing the doors when they were inhibiting the removal of side panel ads. TramClean activists then handed out leaflets (see photos) to members of the public and disposed of the removed advertising.

TramCleaners have been providing the public with their services for over 3 years, however this action was timed to coincide with the #SubvertTheCity week of action called by Subvertisers International.